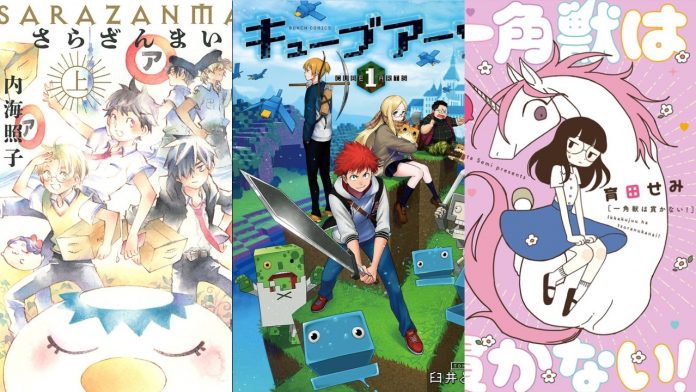 Sarazanmai novels story has been described:

“After accidentally breaking a statue of a mythical kappa, junior high students Kazuki, Toi, and Enta are transformed into kappa themselves as punishment by Keppi, prince of the Kappa Kingdom. Keppi has a task for the boys if they want their bodies back: work for him to hunt down zombie kappa born of twisted human desires. Even scarier, though? They’re going to have to expose their own deepest fears and desires to each other to do so!”

Seven Seas Entertainment will discharge the main volume of the “Cube Arts” manga in North America on September 1.

“One spring break, a high school freshman is selected as a beta tester for a totally immersive VR experience: the open-world sandbox game in a world made up of blocks where your imagination is the only limit on what you can build and explore, high school students from all over the country gather together to tame a digital frontier! But this world may be more dangerous than they realized…”

“Emuko is a twenty-something virgin by choice—in fact, she’s never really dated anyone in her entire life. Her roommate is a unicorn, a mythical creature known for its attraction to virgins. This unicorn, named Sea Urchin, adores Emuko, but sometimes Emuko wonders what she might be missing by avoiding romantic love. And does Sea Urchin love Emuko a little too much?”

Black Clover’s Asta Is Closer To Find Out What Happened To...

My Hero Academia: New Inheritor Of ‘All For One’ Has Been...

Fairy Tail Creator Will Have An İmportant Announcement Regarding Edens Zero...

One Piece Fans React To The Manga’s Latest Chapter

My Hero Academia: Dabi’s Final Act Got Fans So Hyped Up...