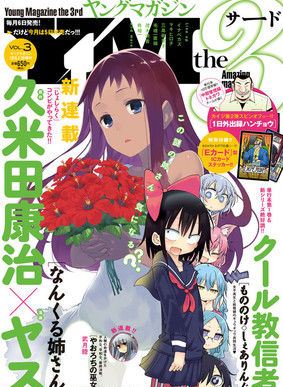 The current year’s third issue of Kodansha’s Young Magazine the Third uncovered on Wednesday that Kōji Kumeta and Yasu’s Nan kuru Nee-san manga will finish in the magazine’s next issue on February 20.

The manga pursues Issa Kinishi, a young fellow who stresses and concerns himself a lot over a wide range of things, and goes through his time on earth being innocuous and tame. One day he meets a lovely, tanned puzzling young lady. This young lady utilizes a cell phone with a split screen, goes into eateries without thinking about their online appraisals, and makes curry without thinking about the stains she jumps on her garments. She burdens Issa’s brain so much that he unintentionally begins stalking her.

Kumeta and Yasu recently worked together on the Joshiraku manga. The pair propelled the manga in the debut issue of Bessatsu Shōnen Magazine in 2009, and finished the six-volume manga in September 2013. The manga got a TV anime adjustment in 2012.

Fate/stay night: Heaven’s Feel Anime Films To Be Streamed In the...

Ōoku: The Inner Chambers Manga To End on December 28th

Dragon Ball Super Has Made Moro An Extremely Powerful Enemy

April 27, 2019
We use cookies to ensure that we give you the best experience on our website. If you continue to use this site we will assume that you are happy with it.Ok