Anime studio ufotable declared on Thursday that the TV anime adjustment of Koyoharu Gotouge’s Demon Slayer: Kimetsu no Yaiba manga will debut on April 6 at 11:30 p.m., and will air on 20 all out channels including Tokyo MX, Gunma TV, Tochigi TV, and BS11.

Haruo Sotozaki (Tales of Zestiria the X, Tales of Symphonia the Animation) is coordinating the anime at ufotable (Fate/Zero, Kara no Kyoukai, Katsugeki: Touken Ranbu). ufotable is additionally credited for the contents.

The manga appeared in Shueisha’s Weekly Shonen Jump magazine in February 2016, and is continuous. 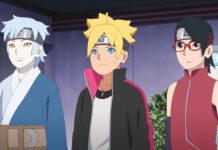 May 17, 2020
We use cookies to ensure that we give you the best experience on our website. If you continue to use this site we will assume that you are happy with it.Ok