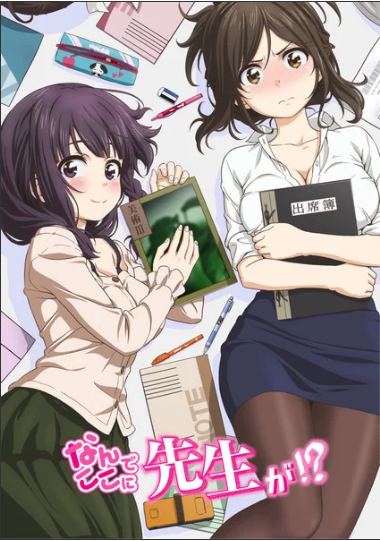 The official site for the TV anime of Soborou’s Nande Koko ni Sensei ga? (Why the damnation are you here, Teacher!?) manga uncovered more cast individuals, more staff individuals, the melodic craftsman for the opening signature tune, and the second visual for the anime on Sunday.

The newly announced cast members include:

Sumire Uesaka reported on her “Uesaka Sumire No Future Diary 2019” show visit on Sunday that her tenth single “Bon Kyu—Bon wa Kare no Mono” will be the anime’s opening signature tune.

Toshikatsu Tokoro is coordinating the anime, and Kazuhiko Tamura (Gunparade Orchestra, Kimi ga Nozomu Eien ~Next Season~, RIN-NE) is filling in as boss movement executive notwithstanding adjusting the character plans for liveliness. The craftsman hidehide is coordinating the workmanship, and Ryusuke Shiino is the workmanship fashioner. Koichi Furukawa is the shading key craftsman. Yoshikazu Miyagawa is the composite executive, and Keisuke Yanagi is altering.

Gin (BUSTED ROSE) is making the music, and Hiroto Morishita is coordinating the sound. Shota Hachiji (Swara Pro) is dealing with the audio effects, and KANON creating the sound.

The manga focuses on male secondary school understudy Ichirō and his female instructor Kojima-sensei who’s well known for being an “evil presence educator.” However, before Ichirō she is by all accounts air-headed and cumbersome, and he continues winding up in debased circumstances with her in spots like the men’s washroom, the men’s bathhouse, the pool, the school hospital, and somewhere else.

As recently declared, Hiraku Kaneko (Tsuredure Children, Valkyrie Drive: Mermaid, The Qwaser of Stigmata) is the main executive for the anime at Tear Studio (Lord of Vermilion: The Crimson King).

My Hero Academia Sets A Way For Izuku To Save Shigaraki